After downloading the bin file (vmware-vcloud-director-5.1.2-1068441.bin) from VMware site and uploading it on my vCD cell , I`ve executed the bin and a long list of "Yes" ends up with an error:

Next, I`ve been looking in the DB server (MSSQL) - logging in with vCD DB admin user (vcddbadmin) and checking if the rights are ok. And they were, since the user was dbowner. I`ve ran 'EXEC sp_updatestats' in query editor and ended up with another error:

Msg 15247, Level 16, State 1, Procedure sp_updatestats, Line 15
User does not have permission to perform this action.

It was stored procedure time: vcddb01 -> Programmability ->Stored Procedures -> System Store Procedures and after a few pages of scrolling down: sys.sp_updatestats. I`ve opened the stored procedure (Context menu - Modify) and on line 15 there was a check to see if the current user was sysadmin. Which, obviously it was not. 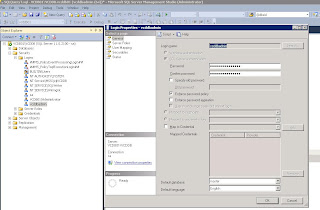 This time it worked ok and updated database statistics. I`ve checked back the installation procedure for vCloud DB and I`ve taken a look at KB 2034540 to see if I`veforgotten anything while creating the user for vCD DB. But it seems I did not. The only reference is to db_owner role. Since I am not a DB guy, I`ll just leave it as is, happy to have solved my problem.
Posted by razz at 4:33 PM