While reinstalling home lab with vSphere 6.7, I was remembered (the hard way) that my on-board NIC is based on Realtek 8111 chipset which is not included in the default vSphere installation media.

I had to go accept the challenge of finding the drivers and creating a new bootable vSphere ISO. Nothing I haven't done before, but since it is not often I've decided to make it a blog post.

First I needed to find the drivers. Using a bit of google foo I found the blog of a long time vExpert (thank you) which has also a collection of drivers. I've downloaded the net55-r8168 offline bundle . From VMware site I've downloaded offline bundle for vSphere 6.7. Placed both of them in the same folder and opened a PowerCLI prompt.


Next, create a new image profile: see what profiles exist, clone one and change its acceptance level to "community" (because the driver I am about to load is community signed):


Add the driver to image profile: 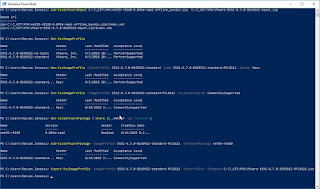 One more step is needed. Since we have the ISO, we just need to write on a bootable USB. To do this, I've downloaded Rufus, portable version. Run the software, select destination a USB stick (it will be overwritten so better not having any useful data on it), selected the source my new ISO and pressed start. 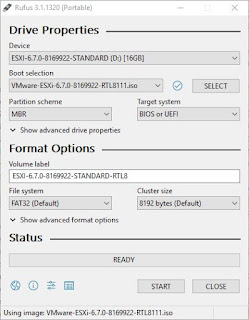 If during the creation of the bootable stick you are asked to update menu.c32, press YES. After it finishes I've plugged the stick in my physical box and happily installed ESXi.

Update:
File download test reached 800 Mbps, a normal value keeping in mind the connectivity between my laptop and the ESXi host.

vExpert Program "You're in!"

I have the bad habit of waking up and immediately reading e-mails on my phone. This time I was in for a great surprise that put a smile on my face. I got accepted to vExpert program.

I consider it to be both an honor and a responsibility. I know my blogging is not as frequent as I wish to. And together with VMUG co-leaders we are striving to make VMUG meetings fun and interesting. The only thing I can do is to keep on giving back to community and make it better each time and hoping to see more and more people at VMUG Romania meetings.

So, thank you for this amazing ride (so far). And a special thanks to Constantin Ghioc (Titi) and Jorge de la Cruz for determining me to apply to the program.

My profile on vExpert Directory is here .
Posted by razz at 12:55 PM No comments: