I just got my new Intel NUC and it was time to install it. So I popped the vSphere 7 USB stick and started installing. Ten minutes later I was looking at the freshly installed system and noticed that the hard drive was much smaller than expected - 337 GB from a 500 GB raw drive. The vSphere 6.7 NUC with the same drive had a capacity of 458 GB. So what happened to 120 GB of space? 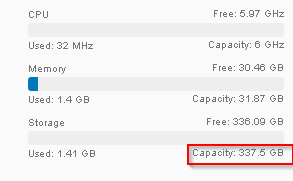 Looking at the partition layout the new 120GB VMFSL caught my attention. 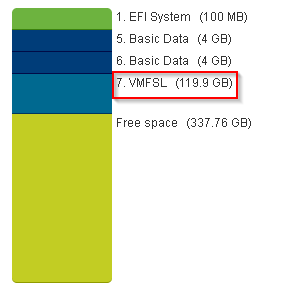 Because I am an engineer and I read the manual after the fact, I started reading vSphere 7 storage requirements in the official documentation. The VMFS-L is used as ESX-OSData partition instead of the scratch partition. It stores logs, coredumps and configuration. However I cannot loose 120 GB on each of my NUCs and I am already running vSphere 7 from a USB stick . So two questions came up:
1.  How to recover some of the 120GB from VMFS-L
2. How to install vSphere 7

I used the install USB stick to install vSphere 7 on it. However this didn't work since vSphere 7 would find the big VMFS-L partition and use it. Which made removing it not possible.

I also turned off scratch

Then I actually booted up a vSphere 6.7 USB installation. Now I could access the disk and remove VMFS-L partition.

2. How to install vSphere 7

Since I already had vSphere 7 running off a 16 GB USB stick, I figured out that it should be able to run with less capacity (again, it is my home lab, I wouldn't to all these tricks in production). Hence I installed vSphere 6.7 on the local disk and that got me to the following layout: 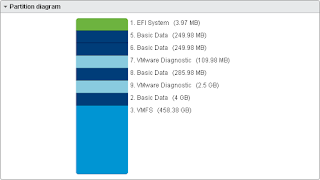 Then I added the host to vCSA 7.0 and upgraded to vSphere 7 using Lifecycle Manager which got me to a better looking final partition layout. The upgrade uses the existing core dump, locker, and scratch partitions to create the ESX-OSData volume. 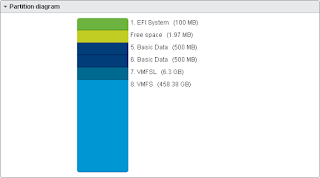 Seems that it's better to read first even if you are playing in your lab. In my defense, I had installed vSphere 7 before but it was a nested ESXi and they had a small dedicated boot drive.