Tips & Tricks to Install and Upgrade vRA 8.x in a Small Lab

I started building my vRA 8 environment in the home lab and even if the process was a pretty smooth one, working in an environment with limited resources presented challenges that I hope this article will help you overcome easily.

For me it was a 2 step process: install vra 8.0.1 and upgrade to 8.1 within week. So I will treat each step independently. Some of the challenges of installing 8.0.1 will certainly apply to a direct installation of 8.1.

As you can easily see vRA 8 shouldn't be actually installed on a 32 GB ESXi host. And if I wouldn't have started with 8.0.1, I don't think I would've have even tried to install 8.1. However, I did start with 8.0.1. I also haven't read the system requirements in the beginning..

If you have a green field like I did, then the first thing to install is vRLCM using the easy installer. At step "Identity Manager Configuration" make sure to select "Install New VMware Identity Manager". This will deploy both appliances. Now you can login to vRLM and create a new environment with vRA 8.

vRA8 needs a certificate, even if it's self signed. Go first to Locker - Certificate and generate a new certificate. 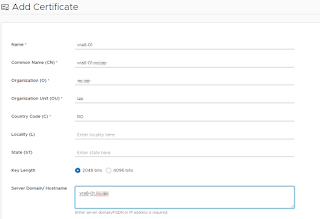 Next, fill in all required information about hostname, IP addresses, passwords, the usual stuff. The precheck should also execute successfully. Before launching the deployment, you can save the configuration as a JSON file. I recommend doing it as it may come in handy if you ever want to automate this install.

The deployment is a multi staged process. In the first stage it will deploy the actual VM from OVF and try to power it on. In my case it failed as it tries to start a 8 vCPU / 32GB VM.

Open vSphere Client and change the settings of the VM - I used 4 vCPU and 30 GB of RAM. I did try with 24 GB, but that ended up with containers not being scheduled due to lack of resources:

In this case I think 30 GB is a decent compromise. Once you have modified the VM, go back to vRLCM and restart the task (Retry request). Take care not to delete the already exiting VM. At this point you only have to wait until all 8 stages are finished.
Unfortunately, two hours later I had another error, this time during vravainitializecluster step. This is something related to 8.0.1 and it does not happen all the time. So you may not see it.

To confirm it, SSH to vRA VM and look at the log file indicated in the error /var/log/deploy.log and look for database connection error. Run also the following command to check the status of vRO containers: kubectl -n prelude get pods. If the vRO container in CrashLoopBackOff a quick search for "vro container CrashLoopBackOff"  will get you to the following KB on new installs of vRealize Orchestrator 8.x failing to install due to a POD STATUS of 'CrashLoopBackOff' (76870). The error is caused by an expired password. Apply the steps in the KB and restart deploy. It picks up where it left and soon vRA is installed and running.

I am curios how a direct install of vRA 8.1 will actually work having in mind the small resource drawback. But even if it doesn't, there is a way to get there.

A few days later 8.1 was released so it was time to upgrade.

For a step by step article on upgrading to 8.1 you may look here, As stated above, I will only focus on the small hick ups.

You need to first upgrade vRLCM and vIDM. Once these two feats are done (again, pretty straight forward thanks to Lifecyle Manager) you will upgrade vRA. I've downloaded the updaterepo ISO file from VMware site and uploaded it to vRLCM to /data (using winscp). Then I  created a new binary mapping by going to Settings - Binary Mappings and adding the binary:

You can start the upgrade using vRLCM repository. The precheck will fail because this time there is a VM and it looks at its configuration and it does not like seeing 4 CPU and 30 GB of RAM:

Do like I did, ignore the errors and start the upgrade. One hour later you should see something similar to the following, which means the upgrade was successful 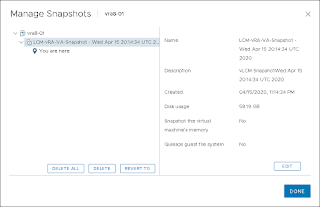 Now I am running vRA 8.1 in my home lab and it works decently at least the Cloud Assembly part that I've been playing with so far. I do understand that resources are required for good reasons, but you need a 12 core / 64 GB host which is not easy to get. In this case, running it with reduced performance is better than not running it at all. There are obvious impacts on the services. For example the time it takes to boot up and it's impressive that it does it in the end. The following snip is a proof of the struggle behind:

Did you try adding directory to vidm 8.1, it gives me connector error any idea how to fix it

I added AD but from LCM, not directly from Identity Manager.