As part of this year's VMworld news, we'll take a quick look at what's new in VMware Cloud. In the past 5 years, VMware Cloud expanded from the beginning with IBM Cloud to all major cloud providers (AWS, Azure, GCP and so on). It also acquired new technologies to help develop its any cloud any app strategy. It's only fair to say that the following picture is impressive and has to be put here to get an understanding of what actually VMware Cloud has come to.

This is a dear picture since I had my (small) part in the IBM team that made possible the IBM Cloud Partnership (yeah, a bit of bragging never hurts). However in this post we'll look at three other topics:

VMware Cloud on Dell EMC is a fully managed on-premises cloud solution. The client buys a rack preinstalled with servers and preconfigured with VMware Software Defined Datacenter (SDDC). VMware is managing the whole infrastructure, while the client's only worry would be to find room in the datacenter for the rack - his own or co-located. So far this offering is available only in US, but will soon come to other parts of the world so it's time to take a closer look.

For the hardware nodes, a t-shirt size approach is available with the latest addition of X1d.xlarge node type which scales to 1.5 TB of memory and almost 62 TB of NVMe storage. You can put up to 24 such nodes in a rack, which sums up to some pretty impressive values.

A new feature allows for segmenting the 24 nodes in a rack in different workload clusters for use cases such as special licensing requirements. It allows for up to 8 cluster (3 node cluster) in a rack. To get your workloads in and out you can now use VMware HCX based migrations.

This is a VMware managed service which includes end to end life cycle management of the solution, support 24 * 7 and a 4 hour break fix SLA.

Since its release in 2017, it has become one of the most talked about and developed integration in the portfolio. It not only ensures that you can run native VMware workloads on AWS bare metal across a global footprint of datacenters, but it also provides direct access between VMware VMs and their services to AWS services. 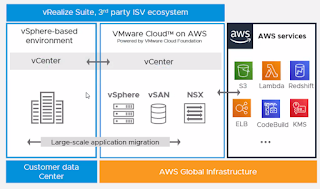 When we talk about what's new in this area we can refer to:

The newest offering in VMware's Cloud portfolio is based on Datrium recent acquisition and it provides on-demand Disaster Recovery as a Service. Even if it can be seen as overlapping with the traditional Site Recovery Manager and vSphere Replication based solution, the main difference is that for the new offering you get to pay what you are using. Instead of having to build up your whole DR site somewhere in the cloud, DRaaS on-demand allows you to keep a minimal number of hosts by replicating to a cloud based storage. When required, VMs are powered on demand on the VMC SDDC capacity.

The following table summarizes the differences between on-demand DRaaS and hot DRaaS. 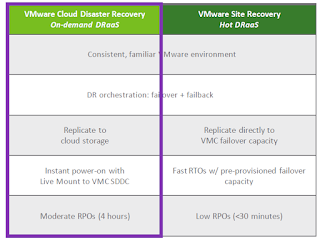 In this case you want to optimize costs before RPO, this is the way to go.