"And now for something completely different"...

The configuration for the ESXi infrastructure I worked with is a bit tricky. VMs are hosted on NFS filer, but the same VMs are mounting NFS exports from the same filer. Much like in the picture below: 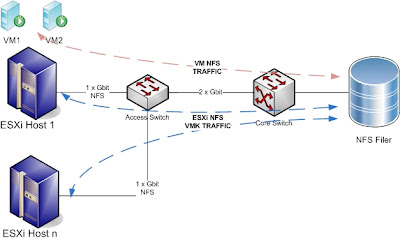 The physical bandwidth between the access switch where ESXi are connected and the core switches where the Filer is connected is limited. So, I had a lot of ESXi servers, with a lot more VMs competing over the same physical links. Lucky me, I had control over the access switches - Juniper. The next step was elementary: ensure enough bandwidth for ESXi and give some to the VMs - rate limiting using firewall filtering from JunOS.

And this is how it was done. First, a policer was created for NFS traffic coming from VMs (guest OS) which limits the allocated bandwidth - in my case 200 Mbits with a burst size of 10 MB. When the limit is reached packets are discarded. This way two things are achieved: a decent 200 Mbit bandwidth  is ensured for the VMs and small files (up to 10 MB) are transferred very fast to the Filer (no limits). When the VMs demand a lot of resources, the policer steps in and ensures that the critical ESXi vmk traffic gets its share.

Then, the firewall filter is created. The filter matches all traffic that goes to the IP address of the Filer and applies the policer to it:

Last, add firewall filter is applied to the interface - in this case it is VLAN 100:

The downside is that firewall filtering adds a bit of a load on the CPUs of the switches. Care should be taken when implementing such solutions (as always).
Posted by razz at 9:47 PM