Before it all starts

In the past 3 months I have been involved in projects using vCloud Director. The necessity to have a test environment appeared naturally. So I started working in my home lab on deploying vCloud Director. I had the help of some other blogs (about which you will hear in the post below) but I have also done it different by using CentOS 6.3 and MS SQL 2012 Express (both not supported by VMware).


The following post presents installation of vCloud Director 5.1 on CentOS 6.3 and MS SQL 2012 Express and will have 3 parts:
Before starting anything make a little IP planning and check that you have a local DNS server and make sure that all infrastructure can be resolved properly (hosts, vcenter server, databases, vcloud cells and so on). I am using an AD (since I`ll  be testing LDAP integration ) integrated with MS DNS server. Other prerequisites: do not forget to deploy the vShield Manager appliance - each vCenter Server needs to have a vShield Manager. We will talk a bit later about basic configuration of vShield Manager.

Next, download MS SQL 2012 Express from Microsoft site, the version that includes management studio (SQLEXPRWT_x64_ENU). Installing the DB is pretty straight forward - make sure to choose mixed mode authentication and configure sa user password. If you miss this step, it can be done after the install ( SQL Server Management Studio - Server properties - Security). During the configuration choose an instance name (VCDDB for example). 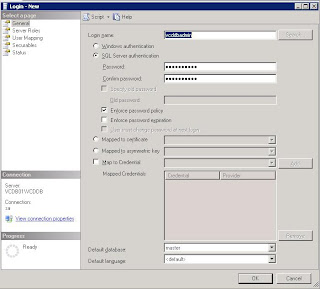 Now it is time to create the DB: Database - New - vcddb01 (you can give it any name). Change the owner to user vcddbadmin. 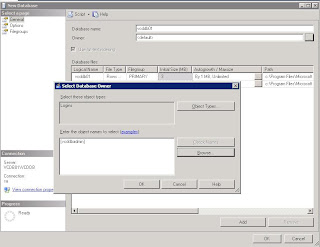 Sizing the DB: VMware documentation offers the following parameters: data file (mdf) size = 100MB, filegrowth= 10% and for log file (ldf) size = 1MB, filegrowth= 10%. In lab environment these should suffice.
A very interesting post about vCloud director database can be found on Erik Bussink blog. Based on that post , I have decided to make the following configuration on my DB:
The actual limits are determined by both SSD space and VM size in my lab environment. 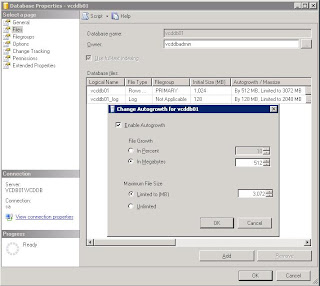 On Options page from database properties the proper collation sequence will be configured to Latin1_General_CS_AS. Default values for recovery model and compatibility level will be left unchanged ( Simple, SQL Server 2012 respectively) 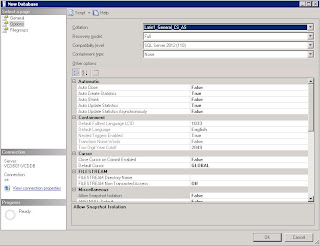 The last action on the database is to prepare the DB. Again, I have used the information from Erik Bussink. Open query editor and execute the script below: 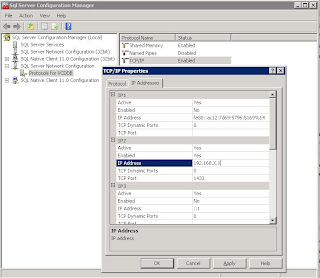 Then, restart the service and check that the server is listening on port 1433 (netstat -van).


Finally, configure Windows Firewall to allow incoming connections on TCP 143 and test that communication with the server on TCP 1433 is ok from another VM using the command telnet ip_addr_db 1433.
Posted by razz at 11:54 PM

I do not get my ip address listening on 1433 using your steps. Is there a service that I need to turn on? net tcp listener is disabled on my server.

Maybe you need to look if sql browser is running.. if you are using dedicated sql instance....

Other possibility is to check if yu set up the 1433 on SQL configuration manager to evict the dynamic port.

We still need to work out the requirenent for the DB sizing ? max size, growth size etc ? what happens if it reaches max size

Howdy, I suppose your weblog may be having net browser compatibility troubles. When I take a look at your web page in Safari, it appears best however, whilst commencing in IE, it is got some overlapping troubles. I just desired to present you a brief heads up! Aside from that, super web sitepage!