The pop reference in the title was in my mind coming from metal ballad world, but as I found out it can easily be hip-hop. However this is where any reference to musical world stops as the following article will focus on some of the major changes that are brought in by NSX-T.

NSX-T is definitely a game changer. Latest release (version 2.4) brings in a lot of new functionality getting to parity with its vSphere counterpart. Coming from an NSX-v background, I am interested in the main differentiators that NSX-T is bringing into the game.

I will add here the NSX-T container plugin (NCP) that provides integration with container orchestration platforms (Kubernetes) and container based platform as a service (OpenShift, Pivotal Cloud Foundry).

At the core of any network virtualization technology is an encapsulation protocol that allows to send L2 protocols over L3. NSX-v uses VXLAN. Geneve is the protocol used by NSX-T. At the time of writing, Generic Network Virtualization Encapsulation (Geneve) is still an IETF draft, although on the standards track. According to people much wiser than me and that were involved in the specification design for Geneve, what the new protocol brings on the table is bringing the best from other protocols such as VXLAN, NVGRE and STT.

One of the main advantages of Geneve is that is uses a variable length header which allows to include as many options as necessary without being limited to the 24 bit header of VXLAN and NVGRE or using all the time a 64 bit STT style header.

NSX-T virtual distributed switches are called N-VDS and they are independent of vCenter Server. For this reason they come in 2 flavors (actually 3) depending on the platform:
- ESXi - NSX's version of vswitch which is implemented as an opaque switch in vSphere
- KVM - VMware's version of OpenvSwitch
- cloud and bare metal - NSX agent

An opaque switch is a network created and managed by a separate entity outside of vSphere. In our  case logical networks that are created and managed by NSX-T. They appear in vCenter Server as opaque networks and can be used as backing for VMs. Although not a new thing , they are different from the NSX-v vswitches. This means that installing NSX-T in a vSphere only environment will still bring in the opaque networks instead of the NSX-v logical switches.

Differences are introduced at routing level where a two tiered model is being introduced by NSX-T. A very interesting blog article is here and I briefly will use a picture from it: 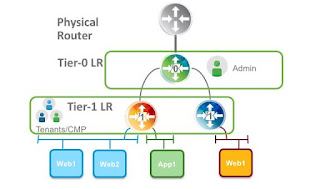 In a very short explanation:


Not both tiers are needed - depending on the services needed, only one tier can be implemented.


I will let you decide which of the changes briefly presented above are more important and I will just list them below:

However, if you are moving around the network virtualization world and haven't picked up on NSX-T, maybe it's time to start.