This is is the first in a series of blogs about NSX-T installation and configuration. Although similar in concepts, NSX-T bring a series of differences from NSX-V. One of them is that it is independent from vCenter Server. And this brings also a lot of changes from what I was used to - some changes are architectural, others are related to functionality and user interface.

The blog series will start with architectural overview, then go to deployment of NSX-T Manager and configuration of controllers, followed by basic configuration of NSX-T environment. Once we get to use NSX-T overlay network between two VMs, we will continue with exploring routers and edges.

At a high level, the architecture is made of the same 3 components as in NSX-V: 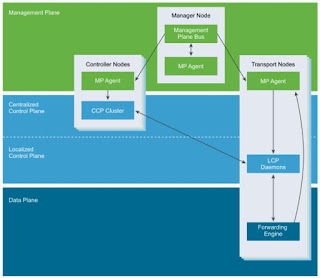 Management Plane Agent (MP Agent) is a component that runs on controllers and transport nodes (hypervisors) and is responsible for executing tasks requested by Management Plane:


Control plane is made of Central Control Plane (CCP) running on the Controller cluster and the Local Control Plane (LCP) running on transport nodes. CCP provides configuration to other controllers and LCP and it is detached from data plane (failure in CCP will not impact data plane). LCP is responsible for most of the ephemeral runtime state computation and pushing stateless configuration to forwarding engine in data plane. LCP is linked to the Transport Node hosting it.

Data plane's forwarding engine performs stateless forwarding of packets based on tables populated by control plane. Data plane maintains state for features like TCP termination, but this state is about payload manipulation and is different from the state maintained at Control Plane's level which is about how to forward packets (see MAC:IP tables)

N-VDS (NSX Managed Virtual Distributed Switch or KVM Open vSwitch)
N-VDS provides traffic forwarding. It is a component presented as a hidden distributed switch (it will not appear in vCenter Server for example). It is always created and configured by NSX manager in vSphere environments. It can be predefined in KVM. This is a major change from NSX-V. It also implies that you will need to have at least one not utilized vmnic on the ESXi host for the N-VDS.
Another change is that the encapsulation protocol used now is GENEVE (latest IETF draft here)

Virtual Tunnel Endpoint (VTEP)
VTEP is the connection point at which the encapsulation and decapsulation takes place.

In the next post will see how to install NSX-T manager and how all the above mentioned concepts are coming together when configuring the manager
Posted by razz at 10:16 PM