It's been an interesting year where VMware announced a ton of new and exciting stuff from projects Pacific and Tanzu to integrating Carbon Black to almost all of the products. Hence this VMworld has been one of the best so far: kubernetes, containers, integrated security, even more networking, infrastructure as a code, terraform, ansible, machine learning... almost forgot, vSphere on ARM. A lot of words and talks not in the traditional virtualization admin's vocabulary. Things are changing and doing it fast. Looking at how VMware redefined itself, caught up with missed trains and how it will lead some of those trains, I think we are going through some of most radical shifts in IT and I personally feel like I've missed at least one train. 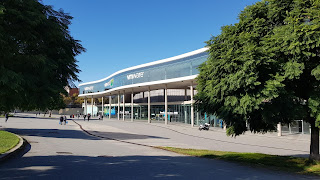 I am an old style IT guy: started installing servers in racks and learning by heart RJ45 cross and direct cabling schemes. When cloud came along, it was not very difficult to apply what I had learnt in datacenters. But I stayed somehow focused on the private and sometimes hybrid cloud. Never went fully cloud native, never gotten knee deep into deploying and operating applications in the public cloud. Naturally, DevOps went from hype to mainstream. And as time passed by, machine learning came along and AI started doing crazy stuff like beating humans at League of Legends (I did play a lot of DotA back in the days and not a single game of Go :-) ) A lot happened in the last 10 years.

I've been going to VMworlds since 2013 and kind of grew up with it. Still, this year I felt like I've been taken a bit by surprise. VMworld is, as always, a place to meet old and new friends and a place to learn about new trends. Barcelona adds to that whole vibe of the event. It was a blast to see people I've worked with on different projects years and years ago or to meet my fellow VMUG leaders.

As for the technical part:
- vSphere on ARM looks promising - comparing to last year there were several devices installed with ESXi  from tablets, to network cards to high performance ARM 2U rackable servers
- machine learning and Watson applied to log monitoring and analysis
- vRA 8 redesign - container based, no Windows
- NSX-T everywhere - in your DC, in the cloud and  with a single pane of glass
- can't wait for the next vSphere release

Solution exchange walk was also interesting:
- if AWS presence was expected, having Azure and Oracle (although the latter was a bit hidden) was cool
- most of the traditional networking/security vendors were not present anymore
- LG and Samsung had pretty big stands
- a lot of backup vendors old and new
- ComputerWeekly was also there with a stand
- Penetration Testing as a Service - a platform from where you could hire pen testers to do some... pen testing
- VMware's booth is getting bigger and bigger

My take away from last week is I have to do a lot of reading and learning, way more than the usual, but this is what makes IT interesting.